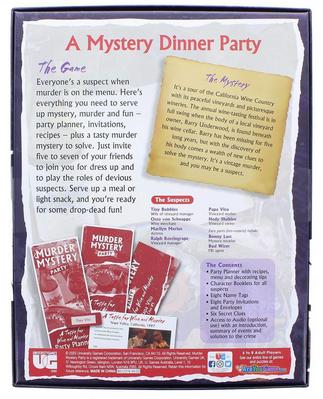 In 1985, University Games introduced the Murder Mystery Party to the world as its first game. Years later, these parties-in-a-box still include everything players needs to solve a murder during an evening with friends.

A Taste for Wine and Murder
Murder Mystery Party

A body was discovered at California vineyard, and you must solve the murder before the killer strikes again..Invite friends to dress up and play the roles of the devious suspects, each with his or her own character booklet with roles and background info.

The annual wine-tasting festival in California Wine Country is in full swing when the body of local vineyard owner, Barry Underwood, is found hidden beneath his wine cellar. Barry has been missing for six long years but with the discovery of his body comes a wealth of new clues to solve the mystery. It's a vintage murder and you may be a suspect.

We provide costume rentals or for purchase and lots of fun accessories. Shop our Store.. 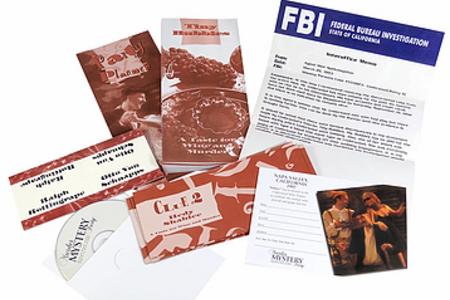 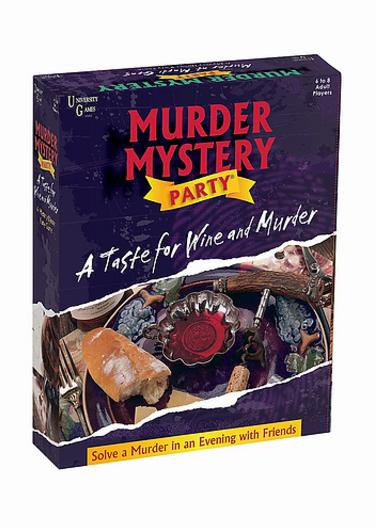 TINY BUBBLES:
Barry's fiance at the time of his death. Perky and pretty, Tiny has an effervescent personality and razor sharp mind. She is now married to the new winery owner, Ralph.

OTTO VON  SCHNAPPES:
A German wine merchant. Boisterous and fun-loving Otto attends wine festivals around the globe, buying the best vintages for distribution in Europe. It is said Otto's preference for red or white can be influenced by green.

MARILYN MERLOT:
Marilyn was crowned Wine Princess at the festival five years ago, then went on to become a Hollywood movie star. She's returned to to Napa Valley for the Wine Festival and to gloat over her success.

RALPH ROTTENGRAPE:
Barry's first cousin and heir-apparent to the Underwood Wine Estates. Long considered the black sheep of the family, Ralph  took over as manager after Barry's disappearance and has been running things his way ever since.

PAPA VITO:
Brought over from Italy sixty years ago to develop Underwood Wine Estates, Papa Vito has devoted his life to the vineyards. Now he just wants to retire and drink a little vino in the afternoon.....Salute!

HEDY SHABLEE:
The owner of the neighboring vineyard and a fierce competitor of the  Underwood's. Barry's disappearance has uncorked a new vintage of troubles for unhappy Hedy.

BONNY LASS  ( extra guest - non-suspect)
A Scottish tourist who has attended the wine festival while vacationing in California. A mystery writer and best-selling novelist, she knows a thing or two about hidden bodies and old wine cellars.

BUD WIZER: ( extra guest - non-suspect)
The FBI agent assigned to investigate Barry's murder. Bud is a beer-drinking man with no appetite for wine. He is determined to put a cap on  this unsolved mystery.