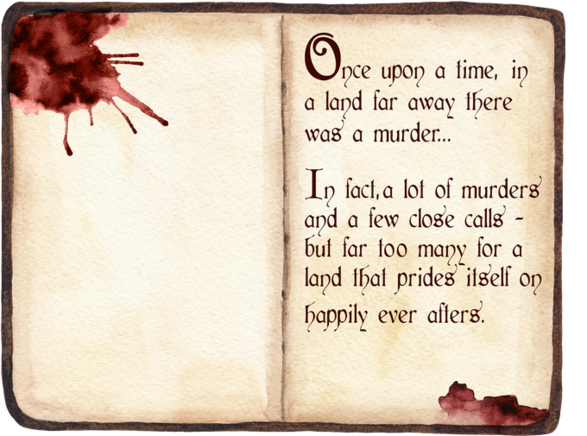 Once Upon A Murder
Fairy Tale Mystery Game

This game contains content that may be suitable for persons ages 13 and older. 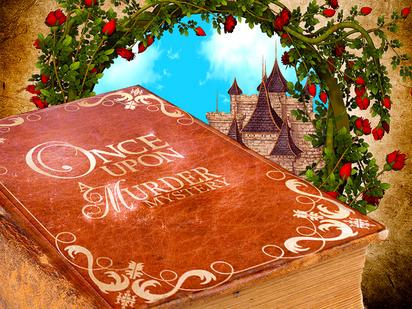 Old King Cole – the King.
With a crown on his head and a chain of office draped over his Tudor-era clothes, Old King Cole is a merry old soul, but that jolly demeanor could just be an act.

Dread Pirate – the Pirate.
This masked pirate is quite new to the kingdom and has earned his moniker by pillaging throughout the fairy tale lands.

Jack – the Beanstalk Climber.
Strong, brave and true, Jack is dressed for his next climb and carries a pouch holding his magic beans.

Alice – the Investigative Journalist.
With a crumpled trench coat over her blue dress, Alice is a reporter determined to satisfy her curiosity.

Queen Grimhilde (QG) – the Business Executive.
The CEO and owner of Fairest of Them All Cosmetics, this former wicked queen is dressed in a sharp business suit and court shoes.

Contrary Mary – the Gardener.
Contrary Mary knows you need to get your hands dirty in order to get the job done. She’s dressed for a day of gardening.

Queen of Hearts – the Croquet Player and Baker of Tarts
If you want to keep your head, you’ll agree with this heart-bedecked Queen!

King of Hearts – the Judge.
This King wears his heart on his crown, not on his sleeve. He always knows which card to play.

Miss Muffet – the Tuffet Sitter.
Miss Muffet is dressed in her dairymaid’s outfit and is on the constant lookout for spiders.

Mr R. – the Dealmaker.
Secretive and private, Mr. R is a puzzle to many. He wears brown knee britches with boots and a soft felt green hat is perched above his pointed ears.

Blind Mouse – the Runner.
Even though he wears dark glasses, this mouse can run circles around most people.

Bo Peep – the Shepherdess.
Bo Peep is a gentle, quiet soul. She has blond curls, a ruffled dress, pantaloons and carries a shepherd’s hook.

Minnie Totts – Mother of many, the Shoe-dweller
Never without her baby monitor, Minnie wears loose, comfortable clothes which suit her life of running after her many children.

Angus McDonald – the Farmer.
Farm work trousers, a plaid work shirt and wellies are the clothing choices of this proud Scottish farmer. E-I-E-I-O.

Cinderella– the Princess.
She’s married her prince and lives in a castle. Life is looking good for Cinderella and so is she in a sequined dress, tiara and non-glass shoes.

Mr Wolf – the Wolf.
Dressed in a grey, loosely-fitting tracksuit and trainers, Mr. Wolf is fond of snacks, especially those wearing red hoods!

Vacca – the Moon Jumper.
Looking striking in her black and white outfit, Vacca is a cow with leaping ambitions.

Simon – the Pie man.
In his chef’s hat and business suit, this pieman knows the secret to success is to keep it simple.

Blue Fairy – Pinocchio’s Wish Granter.
This blue-haired fairy is tired of granting other people’s wishes and is ready to grant a few of her own. She wears ripped blue jeans and blue lipstick.

C.P.- the Pig who Built his House of Bricks.
C.P. isn’t bothered by anyone huffing and puffing. He wears overalls, a dusty shirt and a pig nose would not be out of place, since he is one! 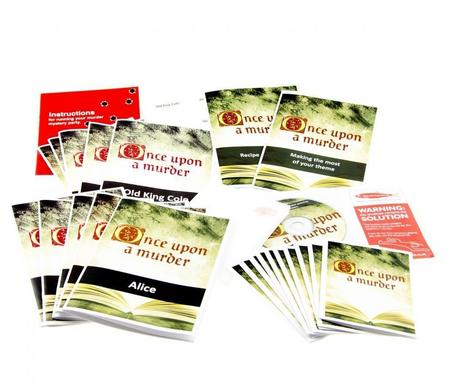 Humpty Dumpty sat on a wall, Humpty Dumpty had a great fall…but no!
Humpty didn’t fall.      He was pushed!
Which of these familiar fairy tale and nursery rhyme characters is the perpetrator?
Can you solve this scrambled case? Everyone loves this game.