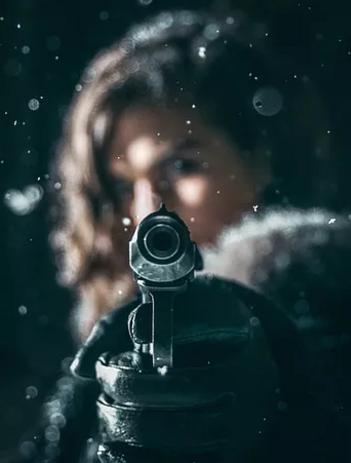 In addition to the above games, we have these games as well:

With Christmas fast approaching the local elite have made their way to Trimming Mansion, an imposing Edwardian building nestling in the trees at the edge of the village, for their yearly Christmas dinner party. This year the dinner party is tinged with sadness, as the billionaire bespoke cracker manufacturer Buster Kracker, in whose house they annually met, died in the autumn.

Fulfilling this final request his wife Paula has invited all the guests Buster wished to be present for the annual Christmas party, including the local Chief Inspector. Unfortunately it appears the Chief Inspector is not off duty this evening, as he has arrived with terrible news. Buster Kracker did not die of natural causes. He was murdered, and one of the guests here is responsible.

Paula Kracker – Socialite and wife of the deceased.
Still trying to act as the perfect host despite her recent loss, Paula has an eye for fashion and has picked the most fabulous jewelry to make the most of her “mourning” black number.

Phil Stockins – Columnist for International Geographical.
Eloquent and persuasive, Phil is a remarkable wordsmith who knows how to dress well for a dinner party and looks extremely dapper.

Gaye Garland – Interior Designer
With an eye for colour and texture, Gaye is pleasing on the eye and her accessories are exceptionally coordinated.

Rudolph Snose – Wine Merchant
Full of bon viveur as well as Beaujolais, Rudolph may have austere taste in clothing – but he really goes to town on his ties.

Holly Sprig – Race horse breeder
With refreshing country style, Holly has an attractive figure whatever she wears, but really brushes up well when invited out.

Frank Incense – Musical Conductor.
Used to wearing tails, Frank dresses incredibly formally for any dinner gathering – but looks extremely dashing because of it.

Murder on the Ghost Train

Don Breathin, owner of the popular theme park “The Frightening Fair” has been found dead – on board his very own ghost train no less!

Foul play is suspected and the staff of the Ghost Train have all been called together as suspects.

The question is: which one of these strange creatures did the dastardly deed?

Dee Composed – Skeleton
With her body on show day in, day out, Dee is forever worrying about her weight and has become a bit of a finicky eater and calorie counter.

Ed Less – Grim Reaper
With hooded cape and scythe ever to hand, you cannot miss Ed in a crowd, even if you might want to.

Flo Ting – Ghost
Ashen faced and always in white, Flo is a terror for drifting through parties or coming when she hasn’t been invited.

Frank Enstein – Monster
With green tinged skin and bolts ever to hand, Frank is a real hands-on sort of a guy who loves nothing better than fiddling with electrical or mechanical devices.

Cassie Spells – Witch
With black pointed hat, black cape and broomstick, Cassie is a stickler for cleanliness and loves nothing better than to wave her dust-busting wand around the place.

Each year, pop stars all over the world wait eagerly for their nominations and subsequent invitations to the annual Smashed Hits Poll Winners Party. This year has been no exception.

With the awards ceremony about to take place, the stars gather in the wings, each one hoping for their big moment on the stage as the winners are announced. As each nervous nominee arrives they are greeted by the evening’s presenters, which tonight includes the famous Doug Beldof, the key organizer of the Elastoplast concert for famine relief in Ethiopia.

Tensions are high already, but then disaster strikes – Doug is found dead – in the ladies toilets no less!

May Donna
Always in vogue with the latest fashion, May Donna is both stylish and sexy and dresses to show off her figure and fabulous dance routines.

Mimi Mia
A member of the famous BABA pop group from Sweden, Mimi loves her psychedelic blouses, headbands and flares.

Cyndi Leaping
In outrageous clothing, and with hair of varying colours; Cyndi is a girl who just wants to have fun.

Kylie Invogue
A young innocent looking newcomer to the pop world, Kylie has been lucky, lucky, lucky with her singles, yet still manages to cultivate her girl next-door image.

Tina Turnaround
With a powerful voice, well proportioned legs and HAIR; Tina is simply the best around!

Katie Shrub
Romantically dressed, with enormous earrings and plunging neck lines, Katie never fails to pull in the men, even if her voice is so high she is close to shattering glass!

High Gables Hospital has a good reputation. The staff are, in the main, friendly and helpful and the hospital is clean and hygienic. Standards are high, even in the hospital canteen, a true rarity in the medical world!

Unfortunately during a routine inspection of the hospital today, a problem was discovered, namely a dead body in the hospital canteen.

On closer examination the dead body was discovered to be none other than a gentleman of some repute, the head surgeon Mr Richard (Ricky) Mortice.

Fellow staff have gathered at the canteen to discuss his death and to uncover, if possible, what caused it.

Mr Colin Oscopy – Surgeon
Young and flexible Colin Oscopy is hip and trendy even in his white coat. He loves the latest gadgets and is always taking lots of pictures.
​
Venus Infusion – Nurse
Professional and very attractive, Venus is a hard woman to please, but men are always trying
​
Herr Otto Peadics – German Orthopedic Surgeon
Strong and splattered with blood, Otto Peadics is larger than life and throws himself into everything with great gusto!

Annie Stetic – Anesthetist
In surgical gowns or white coat, Annie is a chatty conversationalist who is often found talking to herself, she has to, her patients are always falling asleep on her!

Doug Olés, eminent archaeologist and team leader of one of many archaeological expeditions to the New World, has discovered a previously unknown city nestling in the hills of the heavily forested region of the Yucatan peninsula.

Confident of his ability to prove that the site, which he has named as “Nova Corona”, is Site Q, Doug has called a preview dinner and invited celebrities and co-workers to an after dinner lecture in which he hopes to present not only his compelling evidence, but also a sensational new find. However, at the pre-dinner drinks, tragedy strikes. Doug Olés is reported dead. The question is, who killed him and why?

Dick Branston – Millionaire philanthropist.
Flashy and energetic, Dick is a successful entrepreneur with a lot of passion for life, people and new ideas.

Frank Apprezel – Artist, illustrator and caricaturist.
Never without his artists sketch book and prone to scribbling frantically, Frank is suitably dressed for the celebrity occasion, even if he does have pencils and paintbrushes sticking out of his pockets.

Anne De’Chissel – Sculptress.
With an eye for detail and a strong sense of proportion, Anne dresses artistically and loves texture in her clothing.


You Only Die Once

After many years of exemplary service M (the head of MI 6) is retiring. And what a bash it is! Friends, colleagues, and even criminal masterminds have put in an appearance. In fact, it would be safe to say that everyone who is anyone is there to see he gets a good send off.

Well, everyone that is except Roger Damsels, 006 ¾, MI 6’s top secret agent. When a search is undertaken for the celebrated spy, he is discovered dead in his room, leaving M with one last crime to solve before he can retire.

Kitty With-Claws – A pussy cat you wouldn’t want to mess with
This well dressed beauty is more than equipped to kill any would be suitor.

Scaryminger – The man with the golden bum
Living on a desert island, Scaryminger is always able to perfect his all over tan, right to his third nipple.
​
Cuttlefishy – More than a sweet distraction
With floaty dresses and serene expression you could be mistaken into thinking Cuttlefishy was an easy catch.

Ernst FuzzyFelt – The man with the white cat
Despite his keen love of white felines, Ernst’s dark suit never even carries a hair.


Murder on the Disoriented Express *

The Disorientated Express, probably one of the most luxurious trains in the world, is always fully booked. Even now, in 1938, with war looming menacingly on the horizon, her luxury Pullman coaches are packed with traveling rich and famous making their way from Istanbul to Constantinople.

The train has excelled in reliability and punctuality over the years, but today all that is about to change. A famous rocket designer known as Werner Von Black, has been discovered in his sleeping compartment – dead.

The only question is: who killed him?

Sigmund Froid – The Cold Austrian Psychoanalyst
With clipped beard, glasses, cigar and smart suit, Sigmund has a wonderfully calm bedside manner, even if he is obsessed about your dreams and sex life.

Heidi Evidence – Swiss Bank Clerk
A wonderfully beguiling lady with pigtails, freckles and innocent expression. She is often seen in either her smart banking suit, or her Swiss national dress.

Ivan Ego – Russian Inventor
Pessimistic and pragmatic to the last, Ivan is reliable and built to last, even if he does run on vodka.

Dee Sypher – Code Breaker
Secretive and quiet, Dee is a real cloak and dagger sort of a girl in dark glasses and trench coat.

Herr Cutt – German Barber
Never without his trusty pair of scissors, Herr Cutt is round but well turned out with a pencil moustache and slicked hair.

Kiki De’Leggs – French Cancan Dancer
Always dressed to show off her fabulous legs Kiki is always Ra-Ra-ready for anything.

At La Speranza, New York City's most popular Italian eatery, restaurateur Pepi Roni has been shot in the back with his own pistol. Tonight his family and friends will gather to pay their respects to poor Pepi, but one of the guests won't be shedding any tears.

It’s April 15, 1900, Easter Sunday, and Paris is the center of the world’s attention as millions of visitors arrive for the opening of the International Exposition this weekend. Amongst them is an elite but diverse group of individuals staying at the Hotel Paradiso.
As they gather for dinner, however, the peace of the hotel is rocked by an explosion. Billy Bonka, the foremost chocolate manufacturer in America, is found dead in his room, having apparently been killed by an explosive Easter Egg. Suspicion falls on the people around the table. One – or more – of you is the murderer. Your task is to discover who that killer is.

Groovy, baby! It’s 1967, and England still swings like a pendulum. You’re spending the weekend with some of the brightest faces in Britain at the Chelsea home of Lord Michael Jagged. What could be more hip and happening?

But as you gather for dinner on Sunday evening, the shocking news is brought to you by Austin McClue: Lord Michael is dead. Maybe even murdered.

And if he was murdered, one – or more – of you was responsible. Your task is to identify the murderer. Or, of course, to evade detection.

More Murder Mystery Games
Helping you throw an amazing murder mystery game dinner party.
​
Everyone is a suspect when murder’s on the menu. Here’s everything you need to serve up mystery, murder, and fun – party planner, invitations, recipes , costumes* – plus a tasty murder to solve. Just invite five to twelve** friends to join you for dress-up and to play the role of devious suspects. Serve up a meal or light snack, and you’re ready for drop-dead fun!

We provide the costumes, games, instructions and more.
Call us to reserve your game and party.
805-444-1012
Serving the Ventura and Thousand Oaks, CA area